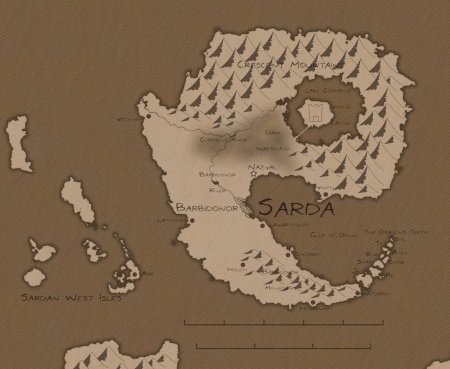 The map of Sarda.

Sarda is often referred to as "the claw of the north" because of it's shape and location in the world. It is best known as being the land of the Barbidons, but has also been the home of various other races such as the Huvudets.

Sarda can be divided into three regions: the Crescent Mountains in the north, the Dark Wasteland, and Barbidonor in the south. Between the Crescent Mountains and the Dark Wasteland is Lake Corpiscus. It is fabled to be the home of the world's worst spoonfish infestation. In the center of the lake is what appears to be half of a mountain. It is here that the Dark Wizard Voth built his castle.

Sarda is home to several interesting species of wildlife. The Dragon's Teeth is the only place where the tragosh can be found. The thagegigogug can also be found in herds throughout the land. Barnacles can be found growing in the Dark Wasteland. It is rumored that giant white creatures intelligent enough to make armor live high in the Crescent Mountains. Another marine mammel, the gigiwivith is also found in the seas around Sarda. Dragons are also frequently seen in Sarda but no one knows where they come from.

It is not known when exactly the Barbidons first settled in Barbidonor, but it is assumed to have been very early in the history of the world. Little remains of this early civilization, but legends tell of the Seven Cities of Lajolaine as being the center of Barbidon culture. If these cities did exist, they were probably located somewhere between Latholish and Lawartholish.

The Huvudets came later in the history, and settled along the western coast of the Crescent Mountains. They never expanded into anything greater than small villages, and for the most part, kept to themselves in the mountains. They disappeared from Sarda about the same time the Dark Wizard Voth came to power.

For most of the history of Sarda, Wegorish was the greatest port city. From it, two roads went north, one on either side of the Barbidonor Mountains. They were known as the Eastern Road and the Western Road. The Eastern Road linked Wegorish, Shigorich, Lawartholish, and Nazval. The Western Road linked Wegorish, Hovarwish, Holich, Latholish, and Vethlish. Several other roads crossed between the two main roads to provide quicker transit to the other cities.