Princes Turok and Turos go hunting, but only Turos returns alive, dragging the body of his brother behind him. Knowing he will be accused and possibly executed for ambition, Turos flees. After three days of pursuit, and with two arrows sticking from body, Turos falls off a cliff and into the sea.

Later that day, pirates pull a man from the sea. They care for his wounds, and he claims his name is Uungluk. Captain Ezrak, realizing there is something special about Uungluk, provides him with opportunities to prove his worth, and eventually gives Uungluk a ship to captain. Together, with several cohorts, they then plot the eventual destruction of the pirate Overlord in an attempt to reclaim the seas and their land from his evil clutches.

At the same time he is sailing the seas, Uungluk struggles to keep his identity secret as news of Prince Turok's death spreads like wildfire. With the assistance of the few people who figure it out, Uungluk will keep his secret until he feels the time is right to let the world know the truth about him. 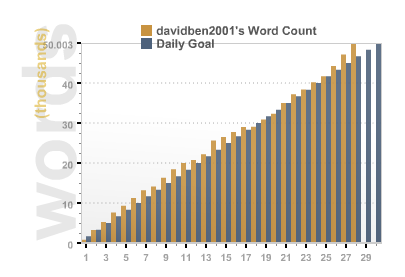 This story was written for the 2009 National Novel Writing Month challenge to write 50,000 words in 30 days (November 1-30). It was on the 28th of November that I validated my story as having 50,003 words, and successfully completed the challenge. Throughout that time, my best daily word count was 3,444 words, and my worst daily word count was 59 words. I have since finished the story, which was only a few thousand words more.
Retrieved from "https://wiki.nebulum.net/w/index.php?title=Turos_the_Mighty&oldid=9671"
Category: