The Journals of Josloy is a story that tells of the life of Josloy during the years 5674 [8:1118] through 5689 [8:1133]. The story is a series of journal entries whereby Josloy keeps a record of his travels throughout Etnyben in search of the 'passage' foretold by prophecy, and a means to defeat the Dark Magicians.

"Of humble lineage, a worthy desire," the thirty-fourth prophecy, a prophecy so ambiguous it provides no major sign. The world contains many people of humble lineages, and who but the Lunari can claim what personal desires are and are not worthy? Thus, with the Lunari withdrawn to their fortress at Iswa, the world remains to languish, always waiting, always hoping, but never expecting the fulfillment to come.

Born in Sodoo, the southernmost city of Bagda, in the year 5646, Josloy was a man of humble lineage and a worthy desire. Throughout his childhood and early adulthood, Josloy desired greatly to be the one to fulfill the next prophecy. He excelled at his studies, demonstrated his prowess in the field, and always expressed his desire to defeat the Dark Magicians. Many tried unsuccessfully to dissuade him from such an unlikely future.

In the early months of the year 5674, Josloy sold his possessions in Sodoo, boarded a ship to Tanarad, and arrived in Atalan months later. His goal, an audience before the Great King Derkias, was refused. However, the man intrigued the Great King’s son, Prince Nomolo. The two spent many days discussing Josloy's plan to explore the great land of Etnyben in search of the prophesied 'passage.' Neither knew what the 'passage' would be, but both understood the importance of fulfilling prophecy. Prince Nomolo was convinced in the worthiness of the man’s desire to fulfill prophecy.

By the month of Ardes, Prince Nomolo provided Josloy with a letter proclaiming his official endorsement of Josloy's plan. This letter, while not as influential as a letter from the Great King, was enough to convince people to donate supplies to Josloy's endeavor. As the Prince's best friend, I, Hudena'Sor, provided Josloy with parchment and requested he keep a record of his travels. Josloy obliged, and the following tales are the result of my request.

The first illustration used for the Google+ release. The background map shows the northern coast of Sarda, along with portions of Bagda and Garna. This illustration was be used for several months.

The second illustration used for the Google+ release. The drawing shows the fortress of the Dark Magicians with the Red Mountains in the background. This illustration was never actually completed before being used. 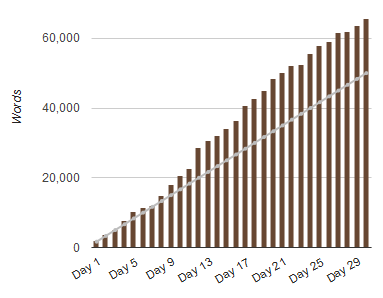 I started writing this story during the 2011 National Novel Writing Month challenge to write 50,000 words in 30 days (November 1-30). By the end of the month, I validated my progress as having 65,740 words, and successfully completed the challenge. Throughout that time, my best daily word count was 6,041 words, and my worst daily word count was 346 words. All of this is now contained within the first volume.
Retrieved from "https://wiki.nebulum.net/w/index.php?title=The_Journals_of_Josloy&oldid=11710"
Category: