Eranithon is a story telling of events that took place between the two primary volumes of The Journals of Josloy.

Fifty-six years ago, something happened in a remote land called Eranithon, destroying the inhabitants. Was it a battle, or a plague, or a natural disaster, or something else? Surviving witnesses of the event are few and scattered, and they do not speak of what happened or the events surrounding the mystery. Few dare sail to those shores, and those who do return with tales of a rocky wasteland where nothing grows.

Now, only months after Josloy's celebrated return from exploring Etnyben, his brief mention of the land in his journal once again puts the spotlight on Eranithon. A notorious pirate calling herself the Queen of the Sea requests the support of the Great King in her planned attack on Irata, the stronghold of the pirate Overlord, who she blames for the destruction of Eranithon. With little chance to persuade words, the Queen of the Sea resorts to one last tactic: bringing with her before the throne, evidence that people still live in Eranithon. 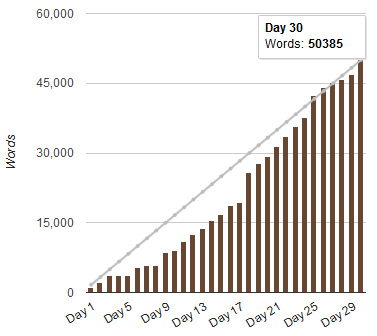 I started writing this story for the 2012 National Novel Writing Month challenge to write 50,000 words in 30 days (November 1-30). By the end of the month, I validated my progress as having 50,385 words, and successfully completed the challenge. This month was especially difficult as I was subsequently working on another story, and writing lengthy papers while working on my degree. I did not complete the story during this time, as it still had several chapters to go.
Retrieved from "https://wiki.nebulum.net/w/index.php?title=Eranithon_(Story)&oldid=11901"
Category: